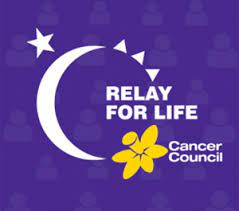 Beginning at twelve o’clock on Saturday afternoon, students started setting up their tents and picnic rugs readying themselves for the big day ahead. As the heat kicked in, they soon found themselves resting up in the shady circus tent of a marquee, all while Mr Johnstone sorted out the rusty Marist tent in the horrendous heat… sorry about that Mr Johnstone.

Around one o’clock, the Opening Ceremony began with the National Anthem sung by the marvelous Charlotte Jaesnch, who left all in awe with her beautiful performance. Well done, Charlotte! She was followed up by the Relay for Life Oath and Survivors’ Dedication, delivered by cancer survivor, Karen Mee, who reminded us all how important Relay for Life is to those affected by cancer. The survivors and carers commenced with the first lap, inviting the rest of us to join in once they completed the first relay of the day. At last, we were off!

With the Marist banner high in the air, students and staff took turns walking around the track, until an announcement was made over the speaker – “The first five teams to get their banners over to the stage, will be relieved for an hour of duty”. From our campsite we could see the realisation set in on the faces of Molly, Eve, Chelsea, and Jayla, a group of eager Year 10 girls who happened to be walking near the stage at the time. Banner in hand, determination spread across their faces, the girls bolted over to that stage. It was the biggest energy burst we had seen from anyone that day. They were well rewarded too, as they managed to get our banner in before any other teams.

Eight o’clock soon came around and most of the students started to prepare for the Luminary Ceremony. Students and staff placed lanterns along the track to remember loved ones lost and to support those going through treatment. It is a very emotional ceremony, one that is very important to a lot of students and staff across the school. It is safe to say, there was not one person there who was not touched by the memories shared on those lanterns.

A few hours into the night and it was starting to become more evident that our Marist participants were getting sleepy. Luckily, we were relieved of our walking duties for a few hours when Mr Gale and Mr Hamilton came on to site, preparing to walk throughout the night. A massive effort appreciated by students and staff, thank you!

After many hours of chattering teeth, games, and warm drinks, six o’clock finally rolled around, meaning students were about to be let in to help with the day shifts. They were met by a crowd of sleep deprived staff and students, not our usual friendly Marist greeting. One of which was Mr Gale, who had zipped his lime green sleeping bag all the way up, causing him to look liked a caterpillar!

As the day finished up, we commenced with the Closing Ceremony. A small speech was made by a member of the Cancer Council Committee Board that made us all feel grateful for our teamwork, despite how tired we all were. After a full twenty hours, we had made it across that line, knowing that the tiredness was worth every penny. Listening to the Fight Back Oath inspired us all, and I am sure many of us will return next year, to continue this fight against cancer.

On behalf of Mr Johnstone and I, we would like to thank all of the staff and students who committed to Relay for Life.  Your dedication and efforts are greatly appreciated by us all.