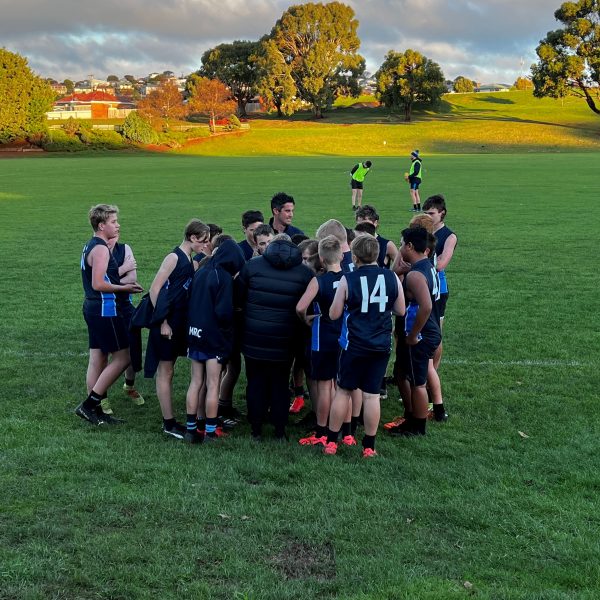 The Senior Football roster games finished in Week 6. Unfortunately, due to a ground closure, the girls team were not able to play their away game against Grammar on Monday, 6 June. The girls took on Scotch Oakburn College to play their final roster game at Marist on Wednesday, 8 June. The girls had a good come from behind win by 13 points, this now means our NSATIS Senior Girls Football Team play in the grand final against Scotch Oakburn next Wednesday in Launceston. They were the successful champions in 2021 and we wish them every success for back-to-back titles.

The boys team travelled to Campbell Town on Wednesday, 8 June to take on Guilford Young College in their final game of the roster. The team have improved throughout the season with plenty of talented footballers coming through the younger grades to make this a very competitive team in the future. The team and coaches are to be commended for their commitment and willingness to travel to Launceston and Campbell Town most weeks.

With a bye for both teams in round 5 of the NWJFU Roster, the 7/8 and 9/10 teams travelled to Smithton to play Smithton High School on Thursday, 9 June. In what was an enjoyable trip for players and staff, there were great results from both teams who are now sitting on top of the ladder in the Western-Division Roster. Both teams will now take on Burnie High School in Week 7 before the 3-week final series.

The Marist Regional College Cross Country Team will be ready to travel to Symmons Plains in Week 9 for the All-Schools Cross-Country Championships. Plenty of students have been training hard and we look forward to seeing them achieve great results on the day.

Preparation and organisation for the Term 3 NSATIS Sports (Soccer, Netball & Hockey) are underway. Students who are interested in playing, please sign up in the Harcombe Centre foyer. Any volunteers, coaches or umpires who would be interested in helping with NSATIS Sport in Term 3, please contact Mr Liam Viney (Head of Sport) via email lviney@mrc.tas.edu.au. Assistance in any capacity would be greatly appreciated.