Across the world, March 8 is recognised as International Women’s Day, a day which sees global celebration of the social, economic, cultural, scientific and political achievements of women. 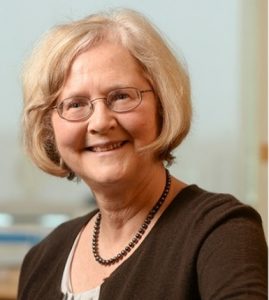 To highlight this annual event, the Marist Regional College community is being offered a snapshot of the endeavours and achievements of some female students from our College STEM Club. Following in the footsteps of Tasmania’s only Nobel Prize winner, Professor Elizabeth Blackburn, (Nobel Prize in Physiology or Medicine in 2009 for her work on telomeres), these students show innate curiosity and great dedication toward finding answers to their questions. The pursuit of scientific inquiry has taken Elizabeth Blackburn a long way from Snug, a small coastal town on the Channel Highway; who knows how far it can take our Marist girls in the future! 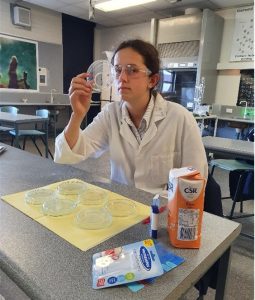 Year 9 student, Penny, is curious to know if the use of artificial sweeteners or synthetic sugar substitutes (like saccharin and aspartame) can promote antibiotic resistance, as recently proposed by UQ researchers. According to the WHO, antibiotic resistance is one of the biggest threats to global health, food security and development today. It is a problem that occurs naturally, but misuse of antibiotics in humans and in animals is accelerating resistance. Many infections (like pneumonia and tuberculosis) are becoming harder to treat as the antibiotics used to treat them become less effective. Antibiotic resistance leads to longer hospital stays, higher medical costs, and increased patient mortality.

Penny plans to track the effectiveness of antibiotics on a range of bacteria. She will compare her findings with those found when the bacteria are grown in media rich in artificial sweetener extracts. This is a topic that has had little global research to date, so Penny’s findings will be significant for human health and wellbeing. 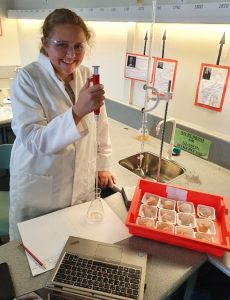 Year 9 student, Nichola, knows quite a lot about chooks, eggs and indeed, eggshells, given that her auntie has a poultry farm. She has noticed that, at certain times of the year, eggshells are very thin and brittle and break easily. Nichola is curious as to whether there is a seasonal influence in shell quality, and if the diet of the chooks can have an impact on shell thickness.

It takes 2 grams of calcium carbonate for a backyard hen to form each egg. To come up with the necessary calcium each day, the hen must either take it in by diet, or borrow it directly from its own bones. Nichola will use acid/base titration methods to estimate the calcium carbonate composition of eggshells at varying times of the year. Furthermore, she will explore various methods of increasing calcium and carbonate intake for laying chooks. Nichola’s findings will be of relevance to large-scale poultry farms as well as to anyone who has a backyard chicken coop. 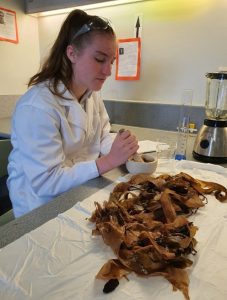 Kate (Year 11) sees great benefits to be gained in the harvesting and processing of local Tasmanian bull kelp, Durvillea potatorum. The name “potable” is derived from the way in which native Tasmanians carried water in containers made from dried and hardened bull kelp.

Seaweeds, and especially kelps, are a rich source of extractable alginates, which, being hypoallergenic, are used for a wide array of medical applications, including as dental prosthetic impression moulds, as wound and burn dressings, as chelators to remove heavy metals from blood, as cardiac scaffolds and myocardial implantations (heart stents) and so, so much more.

To extract the alginate, Kate plans to break the kelp into pieces and initially stir with hot solution of an alkali (sodium carbonate). Her researched method suggests that, over a period of about two hours, the alginate will dissolve as sodium alginate, and be extractable by filtration, albeit a technically difficult process, requiring delicate cellulose extraction from the alginate. Upon extraction, Kate’s task will turn to finding a novel and viable use for her alginate extracts. The prospects are many and truly exciting! 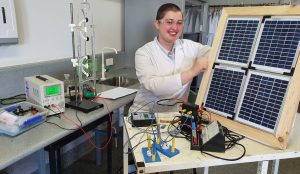 What happens when you harness the sun’s energy using photovoltaic cells and connect them to a Hoffmann Voltameter? The simple answer, says Year 12 student, Seonaid, is that you get a renewable-energy-driven source of hydrogen gas. In the words of Australian Chief Scientist, Dr Alan Finkel, Chair of the Hydrogen Strategy Group, “hydrogen’s time has come. Hydrogen produces only water vapour and heat when burned. When produced from water using renewable electricity, it’s a close to zero-emissions fuel”. Seonaid has trialled the water-splitting process using electrical energy and has worked out an energy input vs hydrogen output ratio. Energy input has been measured as a product of voltage, current, and running-time. Seonaid now plans to match this energy input and generate equivalent volumes of hydrogen, using solar cells and battery technology. This is an ambitious project with enormous scale-up potential for a world that is calling out for renewable technologies for fuel generation. Congratulations to Seonaid for participating in the World’s Greatest Shave on the day of this photo, and for donating all of her hair (and there were lots!) toward wig-making for cancer sufferers. Thumbs up for Seonaid!!